An Introduction To Stone Circle Theory

Stone circles are an intrinsic part of our national and international heritage and yet so little is truly known about the stories they hold. Many have suggested that they are ritualistic sites that are aligned with the movements of the sun and the moon. However some stone circles have no recognised relationship with these alignments.

After spending 15 years researching stone circles, it is my belief that the enormity of these megaliths must have had a much greater use than ritualistic purposes alone. They would have been around at a time in history when there would have been no separation between everyday life and ritual, in that the quest for food would have been central to their existence and all actions would have been motivated by their ability to sustain life. Today we lead sedentary lives, spending most of our time indoors and when it comes to food we only need to think about earning enough money to be able to buy it from the supermarket rather than concerning ourselves with whether we will even have any. Food has become an easily accessed luxury. I mention this simply because it is important to recognise that when we talk about the past, it is important that we don't look at it from the way we are living at the moment but rather with a vast eye, that is wide open to limitless possibility.

With that said, it is my belief that stone circles are ancient remnants of prehistoric animal traps. My theory is at a point where I have realised that using a mirror allows the mind to see the unfolding energetic patterns on the sides of standing stones which support the theory I have developed.

The essence of my theory suggests that standing stones essentially act as anchors from which wooden trellises are suspended and this provides the core mechanism from which nets are used to trap wild animals. If we look at the meaning of the word 'henge' as in Stone Henge, the root of this word in the Oxford Dictionary comes from the Old English word meaning 'to hang'. Furthermore if we look at the name of an early stone circle dating from c.3200-2500BC, which encompasses the late Neolithic to early Bronze Age era we find a circle called 'Arbor Low' which is in Derbyshire. The word "arbor' as described in the Oxford Dictionary means 'an axle or spindle on which something revolves.' Both of these root words support my theory as they describe the action of the trellis.

In the following pages of this site you will find detailed examples of my theory and how I believe stone circles work.

The first stone here is in the Towy valley in Wales. The second image shows the splitting of this stone with a mirror, at the point where I believe the centre of the trellis sits and the third image is the reverse side of the same stone split using the mirror. This causes the illusion of the many faces that can be seen and the image of the rams head. 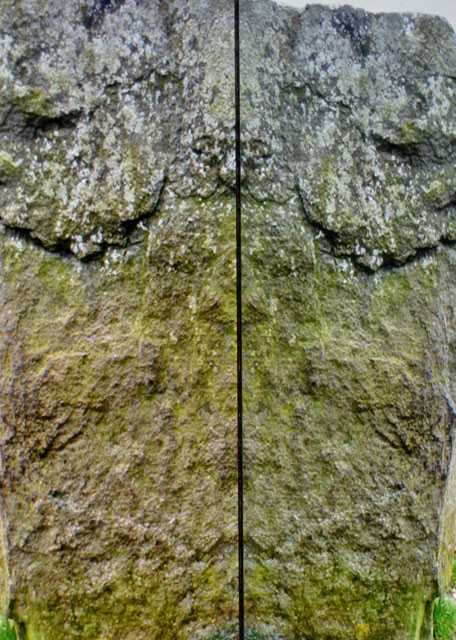 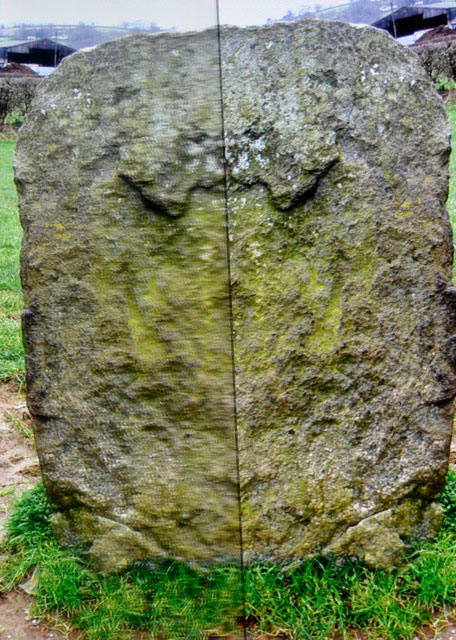 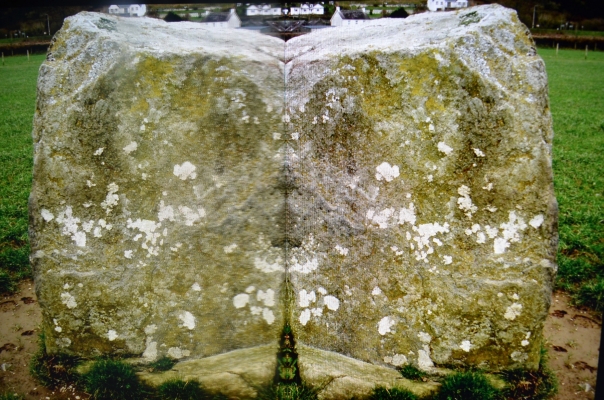 This is the reverse side of the stone